A spring-driven hammer behind the paper causes it to hit the ribbon and a character on a type shuttle. Two type shuttles can be on the machine at same time, and the one to be used selected by rotating the shuttle. Also, shuttles are removable and interchangeable. Has separate shift keys for figures and capitals. Keyboard folds back to save space for travel. Serial number indicates machine was made 1921-1928. Hammond was taken over in the 1920s and the machine was renamed the Varityper because of its ability to switch type styles; Varitypers generally were used in print shops rather than for regular typing. The same basic design continued until the early 1970s. Made in U.S.A. 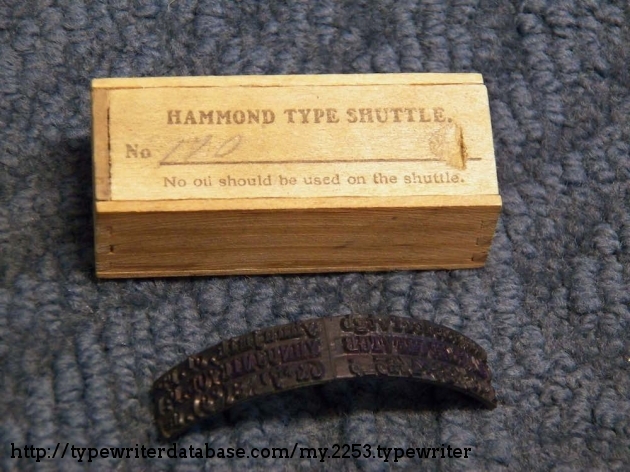 This additional type shuttle is labeled No. 170 and contains the Clarendon font, which was introduced in 1915. "170" actually is marked on the shuttle over an accent character between the 7 and 8 characters. The dovetailed wood box is about 3 inches by 1-1/4 inches.

I have collected typewriters since the early 1970s. My first collectible machine was a Mignon, but I also had everyday typers then, first a Voss ST-24 and an Olivetti Praxis 48, and then a Hermes 3000 and a Hermes 10. Over the last decade or so, I've turned my focus from early machines (Lambert, Blickensderfer, Hammond, Smith-Premier, etc.) to portables.

Besides typewriters, I also am avid about Studebakers, and have had a 1964 Studebaker GT Hawk since 1979.