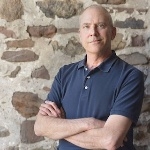 Worked for the Eastman Kodak Company in 16mm & 35mm Motion Picture Film Finishing Production. Finished my career with 7 years in Kodak Photo-chemicals Production. Layoffs came and in 2010 I went to Keller International (Barber Chairs) where I honed my skills on the workings of import barber chairs. As of the end of 2021, I'm Semi-Retired and working 20 hrs per week at Keller International. Now I have time to work on all the typewriters I purchased in 2018/2019.

I received my first typewriter - a Royal (Silver-Seiko) SIGNET as a birthday gift for my 11th birthday on December 20, 1970. That typewriter got a lot of use (school papers, short stories, a try at a Novel) right up until 1982. Then was back into its snap-on case and stored away until 2018.

I was watching the last episode of "The Bates Motel" where the Handy-Man they had was down in the basement typing away on a typewriter. Something clicked. I went up and pulled my old SIGNET out and started using it. Then I remembered we had a family typewriter back in the early 1960. All I could remember is that out had green keys. Went on Ebay and purchased a 1950's Royal QDL -- that was so nice I went and purchased a 1941 Royal QDL -- and I was hooked on buying typewriters ... Royals, Smith-Coronas, Olympias, 1 Underwood & 1 Remington ... All these will keep me busy for the next few years. I like the year 1935 - 1975 -- with the 1960's being my favorite. (Now I just got to get them all up on the TWDB!)